Today is ‘Evaluate Your Life Day’.  Oh yes… It’s an official day for us all to reflect on the things we’ve done, to think about the path we’ve travelled and to plan for the journey ahead of us.  Or, for me, I found it’s to reflect on some of the things I really should have done by now and haven’t.  Like save and plan for my retirement and be financially fab.  Basically, my quick snapshot evaluation showed me I’m screwed.

END_OF_DOCUMENT_TOKEN_TO_BE_REPLACED

My writing month this September is almost over, and so I’ve taken the opportunity to write a review of my progress.  This a) helps me actually get some words down into a blog post. And b) might remind me that I’m writing again… and making progress. I know I’ve been a bit slow in getting blog posts out… I remember writing a post  promising to blog more regularly.  That post was quite a while ago, possibly a year.  Yes, I know… But hey, annually is regular, yes?  Humph.   END_OF_DOCUMENT_TOKEN_TO_BE_REPLACED

So, ‘Friendship Love and Sangria’ is out!  Yes, after months of writing, writing, writing, it’s finally out for pre-order and released tomorrow on two e-readers – Kindle and iBooks. Both are available as a pre-order. More formats to follow, including the paperback which readers will be able to buy directly from me and then from Amazon a couple of weeks later. Should be available within 2 weeks. END_OF_DOCUMENT_TOKEN_TO_BE_REPLACED

I’m an Indie Author… and I wanted to write a little about it. So, let’s start by saying how I can’t quite believe it’s October already but, although sad to see the Summer go, I must say I’m starting to love Autumn the older I get.   I think it’s the colours and sunshine, it’s so pretty.   I find writing in Autumn and Winter easier too as there are less distractions, such as sitting in the sunny garden with loved ones, BBQs,  holidays… Actually, most things distract me easily from writing and I have so many mega deadlines to meet.  Hence the lack of blog posts these last few weeks.  Or months.  Oh, it is actually months… sorry! END_OF_DOCUMENT_TOKEN_TO_BE_REPLACED

I had so many plans for my new book… it was due to be posted off to the New Writer’s Scheme at the end of this month, plus a copy to my ‘ideal reader’ at the same time (so she could a) test it out and b) gather some ideas for the front cover), a final tweak in August and then the release in September.  And, I really was convinced this would all happen.

And then something came along that knocked me a bit.  I found out I was a bit poorly.  Now, I’ve felt poorly for some time and so a diagnosis was in some ways a relief.  But the diagnosis comes at a cost and, whilst I got my head round it (and my family came to terms with it too), my creative energy took a bit of a dive.  Not just a dive, it sunk.

I’d managed just a couple of hundred words some days whilst going through these last few weeks (actually, months) and it is in no way fit for sending to the New Writer’s Scheme or my ‘ideal reader’.  But, I’m getting there.  This week has seen a turn around and I’m getting my mojo back.  And, September is still on the cards (with fingers crossed behind my back).

My diagnosis?  Multiple Sclerosis.  And, I’ve apparently had it for 20 years.  So, I’m relieved that I wasn’t just getting a bit old and creaky and it’s made a lot of sense about things in the past, and I am truly grateful that it has now been officially ‘named’.  It could have been much worse and I’m luckier than a lot of other people.

So, whilst thinking positively, here’s some other thoughts of the day:

a) I now have a real reason for not walking in a straight line and slurring my speech a bit.  I’m NOT drunk… honest.  Well, sometimes I might have had one glass of wine too many, but who would now know??

c) I won’t have to feel guilty when I fail to go out running… again.

d) I’ve experienced a real ‘shopping high’… buying a folding walking stick on Amazon.  Oh yes… not only a folding one, but it’s purple.   This has stopped me from over-indulging on books to read for my Kindle.  And, it’s fun pointing the stick at Puglet (our dog) as he runs around it in circles barking.  Entertainment for several minutes.

e) No matter what, I’ll still be able to write.

So, book number two is well on its way and  it is with great gratitude to all the lovely people that have continued to promote my book ‘Friendship, Love and Apple Tea’, and give me such lovely feedback, as this has been a huge help to getting me back to my ‘Writerly’ style.  Onwards and upwards! Thank you!

Hope you all had a great Easter break.  Ours has been quiet, we’ve had a day at Birdland, a day at the Zoo and a meal at my parents.

Now, during the meal, my Dad announced how he would love to eat at Marco Pierre White’s restaurant again.  This may make is sound as though it’s something he does often.  But, in all his 77 years, he’s eaten there once.  A few years ago, my parents and Rog and I went to Lavenham for the weekend and ate at The Angel.  it was, I have to say, the best meal I’ve ever had, and a great weekend.  And, my Dad has talked about nothing else since.   One of his idols is Marco.  But, seeing as his other idol is the Crowman from Worzel Gummidge, that doesn’t say much…

So, whilst we were eating our dinner on Easter Sunday, my father did one of his ‘faces’ – the one that says ‘I’m hungry/I am getting older/I may never get to eat at such a place again…’  So I said that, should I sell 2000 books, I will take him back to Marco’s and will pay for accommodation over night too (for the four of us).  Now, as I’m only just approaching 1000 books, I guessed this would give me a while to save up…

However, the following day, Dad came down to visit and our daughter had made one of those signs you see on Facebook which My father held with a rather dopey look on his face.  And, since I posted it, I’ve had messages from around the world to say they’ve seen Dad in the photo – American, Italy, New Zealand, Czech Republic…  My Dad’s response? ‘Wow, that’s not natural is it, me being in New Zealand when I haven’t got on a plane…’

So, for those that missed it, here’s my Dad’s photo… Let’s keep our fingers crossed he doesn’t now get himself a Facebook account!  And, although I’m going to have to save lots of pennies, it will be money very well spent. 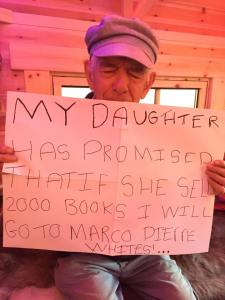 Haven’t been on here for a while.  Many reasons why, which I may be able to share soon.   I haven’t been far away…

So, today I’ve realised that I’ve almost hit 1000 sales of my book.  Now, I really can’t quite believe it.  I honestly thought that the only people who would ever buy my book would be:

So, to see that I’m almost at 1000 is incredible.  And, I want to thank everyone that has bought my book, and taken a chance on reading the work of an un-published author.  In particular, the support of my fellow ‘Turkey’ fans has been over-whelming.  Thank you, thank you, thank you… tesekkur ederim!

So, I’m excited to see what April brings.  And, it’s spurred me on to complete my second book… thanks everyone.  I really do appreciate it

Well, the book is now on its way into the Kindle Store and should be available within the next 12 hours or so.  And, here’s the fabulous book cover, illustrated by the extremely talented Wendy Annal…

I’ll let you all know when it’s live on Amazon… exciting times! Eek!!